Amotekun To Kick Off In Ogun January 2021

The Ogun State government has announced that the Southwest Security Network, codenamed Amotekun, will kick off in the state this January.

The government also announced the commencement of the implementation of Residents Identification Cards with a view to providing a reliable database of the people living in the state.

A statement by the Chief Press Secretary to the governor, Kunle Somorin, said the state governor, Dapo Abiodun, made these known in his New Year broadcast, on Friday.

READ ALSO: Nigerians Join Rest Of The World To Usher In New Year With Fireworks, Prayers

The governor added that the State Health Insurance Scheme, which had been provided with N100miliion seed fund, will take off in the first quarter of 2021.

According to Abiodun, the Amotekun security outfit, which would complement the efforts of existing security agencies, would be headed by a retired Commissioner of Police. 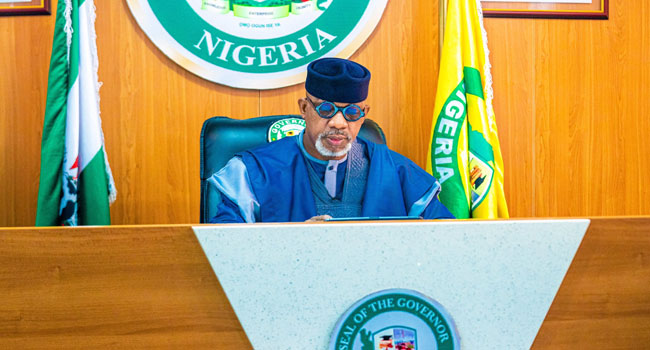 “Our Amotekun Security Network will also take off this month to complement the efforts of other security agencies including the community policing of the Nigeria Police.

“An experienced and reputable retired Commissioner of Police has been appointed as the Commandant, and the recruitment of personnel is ongoing,” he noted.

He pointed out that the year 2021 Budget named “Budget of Recovery and Sustainability” with a size of N338.6billion which he just signed, will aid his government in ensuring strategic allocation of resources to different sectors of the economy.

Abiodun stated further that contract for the construction of 165.30km of roads across the state had been awarded, while rehabilitation and palliative on 88.60km of roads was on-going as well as building and rehabilitating over 954 classrooms in public schools and the introduction of Virtual learning during the COVID-19 pandemic.

He noted that his government’s efforts on agriculture was yielding positive results as it was number one in rice and cassava production in the south west, declaring Ogun was gradually becoming the nation’s food basket thus guaranteeing food security.

Abiodun appreciated the people for keeping faith with his administration and stressed the need for individual responsibility by observing all non-pharmaceutical guidelines like proper wearing of facemasks, social distancing and regular washing of hands to guide against another lock down.

He also called on traditional rulers, religious, community leaders and the media to help in sensitising the people of the severity of the second wave of COVID-19, adding that his administration remained focused despite the virus as it was deliberate, systematic, methodical, inclusive and structured in responses which helped in confronting the many challenges of last year.

PrevPreviousNeymar Laughs Off Reports Of New Year’s Party For 500
NextI Did Not Join Manchester United Because Of The Money, Says IghaloNext