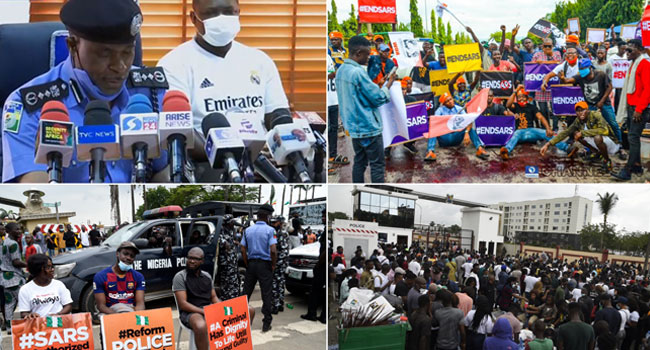 Governors of the nineteen northern states have met with traditional rulers from the region, the Inspector General of Police, and the President of the Senate to discuss the issues of insecurity and other socioeconomic challenges confronting the region and the country in general.

The meeting which was held at the executive council chamber of Kaduna state Government House also had in attendance the Chief of Staff to the President, Professor Ibrahim Gambari, the Ministers of Information, Lai Mohammed and Federal Capital Territory Mohammed Bello as well as National Assembly members and the Sultan of Sokoto.

In a communique read by the chairman of the forum and Governor of Plateau State, Simon Lalong, the northern Governors reject and condemns the subversive actions of the Endsars protest particularly the superlative agitations for regime change by the protesters which are outside the legal democratic process.

They also lamented the devastating effect of “uncontrolled social media” in spreading fake news and fueling crisis and therefore called for a control mechanism of social media practice in the country.

The meeting is in furtherance to resolution by the northern governors to further engage with critical stakeholders from the region to deliberate and find lasting solutions to the myriad of socio-economic and political problems besetting the region especially in the aftermath of the EndSARS protest.

This is perhaps the very first time the forum will gather this caliber of leaders as represented by the leadership of the National Assembly and the President’s Chief of Staff who are both of northern extraction to brainstorm on issues that affect the region.

The meeting was held behind close door, but a communique read to reporters by the Governor of Plateau state at the end of the meeting, resolved to support the police to enable them effectively discharge their constitutional responsibilities

They also commended President Muhammadu Buhari and the National Assembly for being proactive in addressing the issues of EndSARS protest across the country.

The forum while appreciating the peaceful conduct of the youths in the north during the protest, condemned the attacks on persons and property of citizens especially those living in other parts of the country outside their region, as well as the killing of policemen and burning down places of worship.