The Governor of Plateau State, Mr Simon Lalong, has visited the President to discuss the implementation of the National Livestock Transformation Plan.

According to him, the implementation of the project headed by the Vice President Yemi Osinbajo and originally designed to run from 2019 to 2028, will significantly address the farmers/herders crisis in the country.

“I am a member of the livestock committee under the vice president, Governor Lalong said.

“I represent the north-central on that committee. You will recall that this issue came up before and that was the purpose of setting up that committee and we made far-reaching recommendations and funds were to be made available for pilot states and Plateau is a pilot state. About nine states were pilot states.

“The issue was to move away from the old ways of rearing cows and to find more modern ways of doing it.

“In some places they will do it that way but in a confined environment which was all agreed and that is part of what I was raising, to remind Mr President to hasten the implementation of the National Livestock Production.”

The meeting also came on the same day that the Sultan of Sokoto, Muhammed Saad Abubakar, met with the leadership of the Miyetti Allah cattle Breeders Association of Nigeria (MACBAN) to discuss the security challenges involving criminals who operate under the guise of herdsmen. 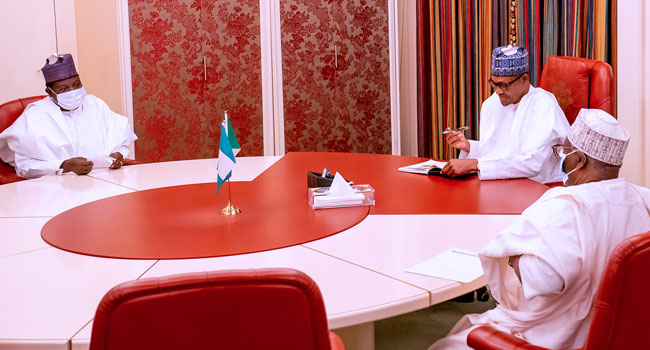 At the meeting held behind closed doors on Friday, the leadership of Miyetti Allah attributed the kidnapping and banditry that have continued to thrive in the country to the inability of the government to act decisively against the criminals.

The meetings are coming in the wake of tensions especially across the south-west states which many have attributed to criminal Fulani herdsmen.

According to the Aare Ona Kankanfo of Yoruba land and the National Coordinator of the Oodua Peoples Congress, Gani Adams, most of the lands belonging to the Yorubas have now been seriously invaded.

He also raised concerns that if things are not handled properly, soon, there will be famine in Yorubaland.

Read Also: South-West Security: If Care Is Not Taken, There Will Soon Be Famine In Yoruba Land – Gani Adams

“If you know what is happening in Akoko South West, its not funny at all. Most of the criminal Fulani herdsmen have occupied it,” Mr Gani said in an exclusive interview with Channels Television on Wednesday.

“So, I think all hands must be on deck to make sure this ugly incident is taken care of.

“It is a serious invasion and we have been seriously infiltrated and we have traced the hand of conquest from some Fulani herdsmen because we have some Fulanis that have been living with us peacefully for the past 100 years (about two or three generations of Fulanis living with us peacefully) but for the past seven years, we have now noticed strange things from the Fulani tribe. They have discouraged the Yoruba people from farming and if care is not taken, within one year there will be a famine in Yorubaland”.

His comments come days after tensions escalated in the Ibarapa axis of Oyo State where an indigene Sunday Igboho had given Fulanis in the area an ultimatum to leave following allegations of criminality.

Videos shared on social media showed Igboho holding a well-attended rally where he swore to drive out Fulani herdsmen from the entire Yorubaland for causing insecurity and banditry.

However, in reaction, Makinde said his government and security agencies need not wage war against any ethnic group but against criminal elements, irrespective of their tribes, religions, or creed.

The governor added that his administration would not allow anyone to threaten the peace of the state by acting unlawfully and saying things that are alien to the Nigerian Constitution, noting that acts that can cause chaos in the state will not be accepted.

His Ondo State counterpart, Governor Rotimi Akeredolu had also earlier issued a quit notice to the criminal herdsmen who he noted had infiltrated the forest reserves.