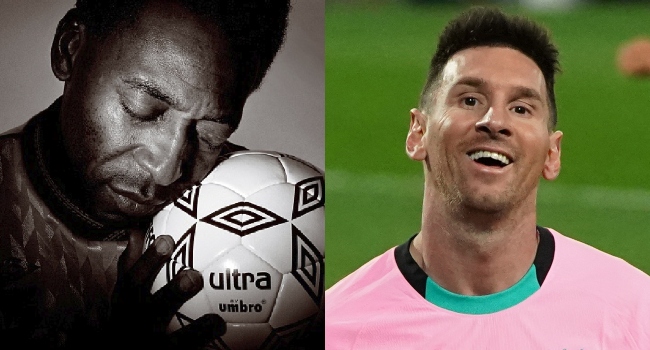 Lionel Messi hit a historic land mark two weeks back when he scored his 644th goal for Barcelona against Real Valladolid in La Liga, surpassing Pelé as the player with the most goals scored for a single club.

However, Santos FC in a statement released on Saturday claim that the Brazilian legend, Pele goal tally is indeed over four figures putting it  at 1,091 goals.

There has been a  lot of controversy about how many goals the all time leading goal scorer for Brazil actually scored for Santos, while he has been credited with 643 goals for the Brazilian club Pele has claimed in the past that he scored over 1000.

“In the last few days, much has been said in the press and on social media about the number of goals scored by Pelé with the Santos Futebol Clube shirt. According to some statisticians, Argentine Lionel Messi (Barcelona) became the player with the most goals for the same club, reaching 644 goals for the Catalan club, excluding friendly matches – called by some as official goals,” the statement read.

Santos made a claim for Pele saying goals against the likes of Real Madrid Juventus and Inter Milan should be included in the overall goal count.

“The 448 goals that today try to disqualify, were scored against the main clubs and teams of the season. América (Mexico) and Colo Colo (Chile) each suffered nine goals from Pelé. Internazionale Milan, one of the main teams in Europe in the 1960s, suffered eight more goals from the King. The list is immense and with participants weight: River Plate, Boca Juniors, Racing, Universidad de Chile, Real Madrid, Juventus, Lazio, Napoli, Benfica and Anderlecht. Barcelona himself, where Messi now plays, was also a victim of Pelé: four goals, scored in four matches.”

The statement went further to fault statistics in misleading the general public.

“A small sample of how the statistical cut can mislead us, is when we analyze the titles of the Campeonato Paulista. When we consider only the era of professionalism in São Paulo football (from 1933), Santos becomes the biggest state champion, with 22 achievements – alongside Corinthians. In this way it surpasses Palmeiras, which stands at 19. Still, historical revisionism cannot erase history: the titles of the amateur era are valid, with equal importance to those won after the implementation of professionalism. Thus, Santos has 22 wins, against 30 from Corinthians and 23 from Palmeiras.”

The Brazilian club’s argument is that the matches played were official as they were played with official teams and conducted under the rules of the game, and as such should count for that number rather than just the 643.

PrevPreviousYuletide: Third Mainland Bridge To Be Reopened Midnight
NextFederer Out Of Australian Open After Knee SurgeryNext