Governors of the South-West and traditional rulers are calling for special protection of economic assets in the region.

The Governors and traditional rulers made the call during a meeting held on Sunday in Lagos State.

“Before our very eyes, what started as a peaceful demonstration turned to different thing that became a threat to all of us, who are regarded as elite,” the Chairman of the South-West Governors’ Forum, and Ondo State Governor, Rotimi Akeredolu, said in the meeting attended by the Chief of Staff to the President, Ibrahim Gambari.

“What we witnessed in the violence showed that something needs to be done to address the underlying issues and come out with solutions. We must be able to sustain the peace in our region at all cost.”

During the meeting meant to address the destructions that greeted the recent destructions in the country, particularly in Lagos, the Ondo Governor noted that the violence sparked by the EndSARS protest shook the Southwest to its foundation.

According to him, the dimension of violence especially in Lagos was worrying, admitting that the peace of the South-West was fragile in the aftermath of the violence.

President Muhammadu Buhari who was represented by Professor Gambari, said the #EndSARS protests showed the frustrations of the youths who had been sidelined for a long time.

According to him, the political class must go beyond rhetorics and equip young people to make them competitive in the labour market.

“Our Government’s effort are emerging from multiple level. The Vice President and Governors are designing an engagement framework through the National Economic Council that will be rolled out across States of the Federation,” the chief of Staff to the President was quoted as saying in the meeting.

“Chief among them is police reform across all its dimensions. Community policing as an additional layer that can resolve some of our security issues.”

Other persons who attended the meeting included all serving members of the Federal Executive Council (FEC) from the region, the Inspector General of Police (IGP), Muhammed Adamu and traditional rulers from the South-West.

See photos from the meeting below: 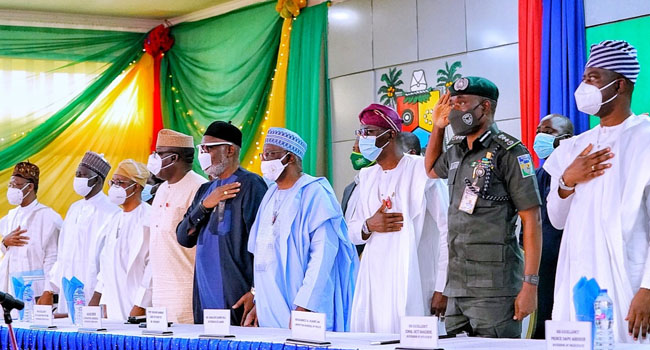 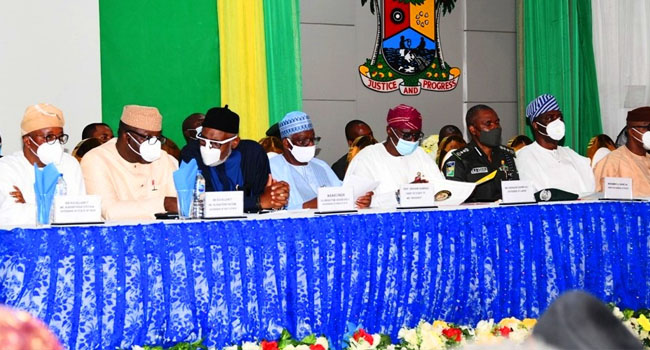