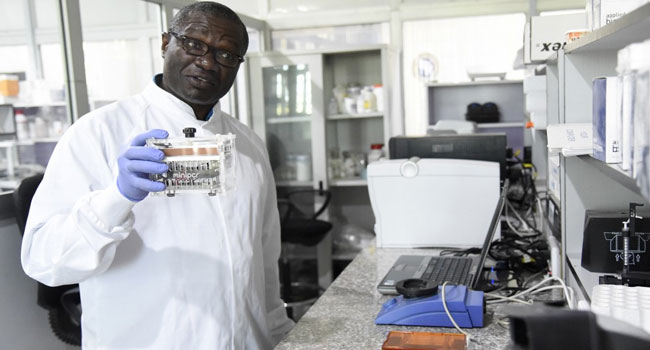 A researcher who identified a novel coronavirus variant in Nigeria has cautioned against automatic assumptions that it poses similar risks to strains that have emerged elsewhere.

The new strain was uncovered last week by scientists at the African Centre of Excellence for Genomics of Infectious Diseases (ACEGID) in southeastern Nigeria.

ACEGID director Christian Happi said the variant was found in two out of 200 samples of virus collected from patients between August 3 and October 9.

The two samples were taken from the same state in Nigeria at different times.

Britain tightened restrictions after finding a new strain there that it said was more contagious than initial forms of the virus.

South Africa says a new strain detected there could explain the rapid spread of a second wave that has especially affected younger people.

Happi stressed that scientists were racing to unlock knowledge about the Nigeria strain and urged people not to “extrapolate.”

“We have no idea, no evidence to say that this variant is linked to the spike we are seeing in Nigeria or not,” said Happi, explaining that samples from the latest cases were being analysed for an answer.

Compared to the country’s population of some 200 million people, this number is tiny.

However, the tally of cases has been rising by several hundred a day since the start of December. There has been a major increase in Lagos, Nigeria’s economic capital, prompting the authorities there to reinstate a curfew and gatherings of more than 50 people.

But the number of deaths in Nigeria has not experienced a proportionate surge.

It is one of only 12 in Africa designed to sequence viral genetic code and track mutations — telltale changes that can be used to build a family tree of the microbe.

From this, the scientists at Ede believe the variant evolved “within Nigeria, I don’t think it was imported from anywhere,” said Happi.

“When changes occur, what matters most, what we’re focusing on, is the spike protein,” he said, referring to the prong-like protein by which coronavirus latches onto a cell and infects it.

Happi said there was a “tendency to extrapolate” after a discovery of this kind.

But he cautioned strongly against automatically assuming that what happened in one population setting would also happen elsewhere.

“A lot of the models drawn at the onset of the pandemic, all got it wrong,” he said.

“They were saying by now that a third of the African population would be dead. So people need to think,” he said.

“It is very wrong to assume models based on knowledge that are not accurate or on assumptions that are dependent on data obtained from Europe or the US and transpose it to a continent like Africa — we are genetically different, we are immunologically different.”

All of Africa has recorded 2.4 million cases, according to an AFP tally — just 3.6 percent of the global tally, although testing is also far less widespread. The continent’s death toll of 57,000 is less than a fifth of that of the United States.

“Give us some time,” he said in a videoconference from Addis Ababa. “It’s still very early.”

Nkengasong appealed to Africans not to let down their guard, warning of the danger of a second wave of infection.