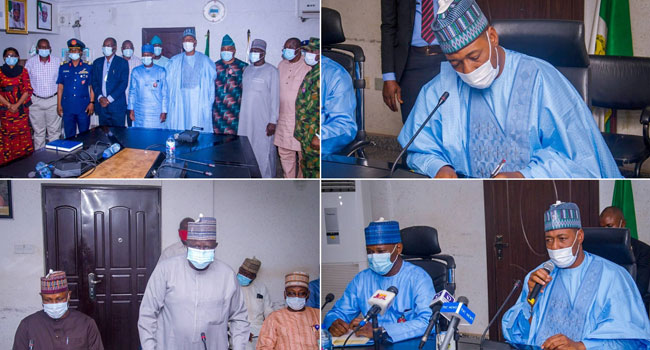 The governor, however, acknowledged interventions made by NEMA, the Northeast Development Commission, and far-reaching efforts by the Nigerian Customs Service following a Presidential directive two years ago, that food seizures be used for humanitarian support in crisis areas.

Zulum noted that food interventions have to be sustained because whereas the majority of IDPs rely on agriculture as a means of livelihood, substantial portions of them cannot access their farmlands due to insurgents.

According to Commandant General of the Nigerian Security and Civil Defence Corps, Abdullahi Gana Muhammadu, Governor Zulum was one of the first governors to domesticate the use of armed NSCDC personnel as agro rangers, for protection of farming activities in parts of Borno State.

Even though the partnership gave birth to an increase in farming activities by IDPs in farmlands in outskirts of towns, acceleration of attacks by Boko Haram reversed fortunes, forcing thousands of displaced farmers to rely on food aid.

DG says every state wants a governor like Zulum

Meanwhile, NEMA’s DG, AVM Muhammadu Muhammed (Rtd) said yesterday for his commitment, hard work, and dedication, every state in the country would like to have Borno’s Professor Babagana Umara Zulum as their Governor.

“If you go into Maiduguri, you will be shocked, you wouldn’t believe you are in Maiduguri. I have been to Maiduguri with a special assistant to Mr. President from a particular state, he looked at me and said, can you please borrow this Zulum of a man to us?

“I am sure every state will like to have this gentleman Professor as a Governor. If there is one gentleman everybody envies, whether they are able to do what he does or not, it is Professor Zulum. And the simple fact is that we all know what is right and what is wrong is wrong and what is right can only be achieved with the fear of God” AVM Muhammadu said.

The DG assured Governor Zulum of the agency’s support to Borno state, particularly in the actualization of Borno’s 25-year development plan unveiled recently.

“Your Excellency, every staff of NEMA is willing at all times to give you 100% support in everything you need. You have been very hard. I assure you that the President, Commander In Chief of the Armed Forces has given us the mandate, he has given us the resources and has said it many times to do everything possible to support what you do, and key into the Borno State 25 year development plan” the DG added.